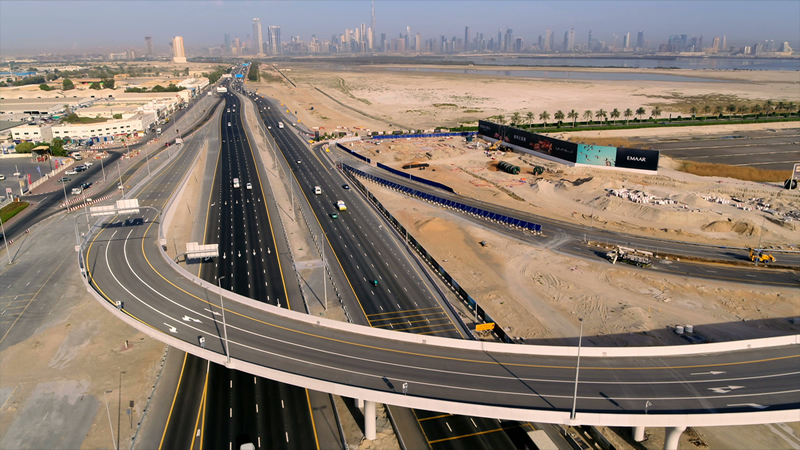 Dubai’s Roads and Transport Authority (RTA) opens today (Saturday) a flyover leading to the Western entrance of the Dubai Creek – Dubai Creek Harbour; an important phase of the Sheikh Rashid bin Saeed Crossing Improvement Project. The project encompasses the improvement of Nadd Al Hamar Street - Ras Al Khor Road intersection, along with extensive improvements of Ras Al Khor Road.
“The project, which includes the construction of a new bridge of 3 lanes and 740-metre length, links the traffic inbound from Dubai-Al Ain Road and Al Khail Road heading Eastwards to Dubai Creek – Dubai Creek Harbour. The bridge has a capacity of 7500 vehicles per hour in the entry direction, and 3000 vehicles per hour in the exit direction,” said His Excellency Mattar Mohammed Al Tayer, Director-General and Chairman of the Board of Executive Directors of RTA.
“The project includes the construction of a new street of 4 lanes in each direction extending 1.5 km in addition to entry/exit points from and to the newly constructed buildings, to ease the movement of traffic inbound from Nadd Al Hamar Street-Ras Al Khor Road junction. The new network ensures free traffic flow to the newly constructed residential units at Dubai Creek area by linking with surrounding streets. Works completed included a modern lighting network of 108 light poles,” added Al Tayer.
3 Contracts
The Sheikh Rashid bin Saeed Crossing Improvement Project is one of the biggest projects RTA is seeking to complete over the next few years. It includes the construction of a flyover crossing over the Dubai Creek to link Jaddaf area with the street separating Dubai Creek and Dubai Festival City.
The project is split into several contracts. The first contract, which has been accomplished, covered the construction of a bridge leading to the initial Western access of Dubai Creek – Dubai Creek Harbour.
Work is progressing on the other two contracts. The first contract covers improvement of Ras Al Khor Road from Nadd Al Hamar junction to Sheikh Mohammed bin Zayed junction to ease the traffic flow on Ras Al Khor Road. It includes the construction of a 2-lane bridge with a capacity of 3000 vehicles per hour to ease the traffic from Nadd Al Hamar Northwards to Ras Al Khor Eastwards. It also includes the construction of a 2-lane tunnel with a capacity of 3000 vehicles per hour to ensure smooth traffic flow for motorists coming from Ras Al Khor Road Westwards heading to Nadd Al Hamar Street Northwards. Besides, works include the construction of collector roads along Ras Al Khor Road extending 2.5 km. Works include improvements on a sector of 1.2 km on Nadd Al Hamar Street to accommodate the anticipated traffic volumes.
The second contract covers the construction of two flyovers. The first is a 2-lane flyover to ease the exit from the Dubai Creek Harbour to Ras Al Khor Road in the direction of the junction of Sheikh Mohammed bin Zayed Road. The second flyover, which is situated near Bu Kadra junction, serves the traffic coming from the junction heading to Ras Al Khor Industrial Area, which eliminates the overlapping traffic at the junction. The contract includes improvements on Ras Al Khor Street between Dubai-Al Ain Road and Nadd Al Hamar Street together with service roads extending 4.2 km along Ras Al Khor Street. Works in these two contracts are expected to be completed by the fourth quarter of 2022.
The completion of the three contracts of the Sheikh Rashid bin Saeed Crossing Improvement Project will reduce the journey time between the Sheikh Mohammed bin Zayed Rd and Dubai-Al Ain Rd from 22 to 8 minutes. It will also serve mega development projects in the area such as Al Kheeran, Dubai Creek, and Meydan Horizons. Overall, it will serve more than 650 thousand residents.
Creek Harbour
Dubai Creek project (Dubai Creek Harbour) reflects Dubai’s new vision. It forms a blend of creativity and excellence in the surrounds of the glittering Dubai Creek Tower taking the centre stage and posing as a global icon for the 21st century. It constitutes a unique addition to the skyline of Dubai and raises the city's profile among top metropolis along with a galaxy of mixed-use residential and commercial towers.
Publish Date: 27-06-2020