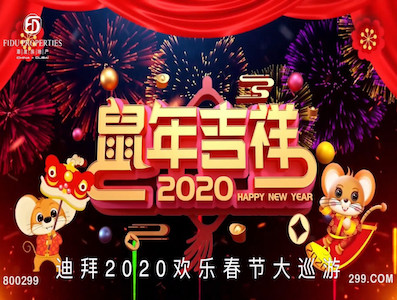 Start beating the drums & the gongs for the Chinese 2020 Spring Festival. See the full Kung Fu and acrobatics performance, the exciting dragon dance & lion dance and other characteristics of Chinese folk activities that shine in Dubai to promote Chinese culture to the world.
The “Happy Chinese New Year 2020” parade organized by the Chinese Consulate General in Dubai, the Ministry of Culture and Tourism of China and the Executive Committee of the “Hala China” program in Dubai was held in the City Walk of Dubai last January 17, 2020. For the third consecutive year, Hala China, hosted by Meraas and Dubai Holding, co-sponsored an event aimed at showing Chinese diasporas to Dubai and the wider UAE that showcased a series of Chinese culture that commemorates to the Chinese New Year on January 25th.
The festivities began on Al Mustaqbal Street, City Walk. The decorations throughout the city was in preparation for a month-long celebration. The event has entered its third year and is expected to attract more than 50,000 visitors, including traditional Chinese performances, Chinese New Year parades, dragon and lion dances, traditional dances, and competitions.
Hundreds of guests from China and the UAE, overseas Chinese in Dubai, overseas students, Chinese companies and institutions in Didi and international friends participated in the event. People rehearsed on the city pedestrian streets and watched the spectacular parade. The team includes dragons, acrobats and traditional dancers. There are more than 40 groups in the parade, including schools, Chinese diasporas, the Chinese Chamber of Commerce and the Marching Band from the Dubai Police, and performers from China. City Walk visitors watched the Chinese Symphony Orchestra, dragon and lion dance, acrobatics and kung fu performances. More than 4,000 participants participated in this year's largest Chinese New Year parade in Dubai.
Mohammad Saeed Al Shehhi, a member of HALA CHINA's board of directors, said the celebration was the largest Chinese New Year celebration outside China. "With these celebrations, we mark a new era in China-UAE relations. China remains one of the UAE's largest and most important trading partners, and this year, our bilateral trade volume is expected to exceed 250 billion dirhams. In the past 2019, as many as 680 new business licenses have been issued to Chinese companies. With more than 200,000 Chinese people living in the UAE, we are proud that Hala China's events have quickly become a highlight of the Dubai calendar.
"In the coming weeks, Dubai will provide residents and tourists with a variety of traditional Chinese performances and experiences. In addition to the dragon parade, the first ever lion dance competition (in traditional Chinese dance, New Year and other Chinese cultural festivals) and Chinese arts and crafts exhibitions. "
"We are fortunate to have witnessed the best time in the history of the bilateral relationship between the UAE and China. The celebrations during the Chinese New Year will provide everyone with a special opportunity to learn about Chinese culture and its history in order for the residents of the two countries to bring greater cultural awareness and social integration. "
Publish Date: 22-1-2020