UAE is leading the war on the coronavirus pandemic

How UAE is leading its war on the coronavirus pandemic 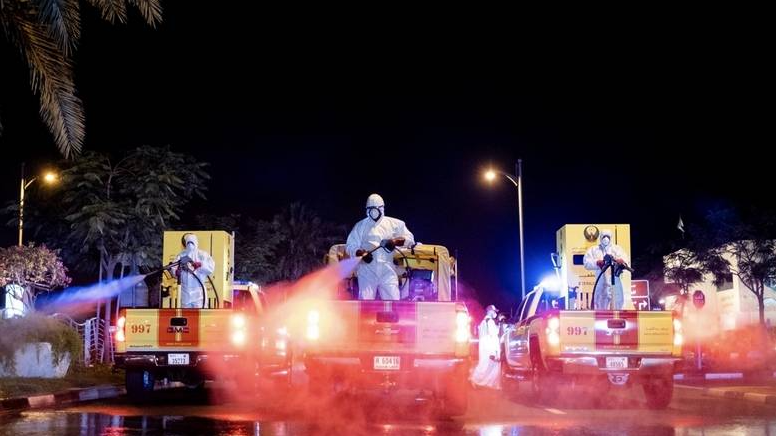 There is a reason why the UAE is ranked one of the safest countries of the world. It has the will and uses all the possible resources to protect each and every individual in the country, regardless of the person's nationality, race or gender. This is being best demonstrated during these trying times as the world reels under the effects of the Covid-19 pandemic.

There is a reason why the UAE is ranked one of the safest countries of the world. It has the will and uses all the possible resources to protect each and every individual in the country, regardless of the person's nationality, race or gender. This is being best demonstrated during these trying times as the world reels under the effects of the Covid-19 pandemic.

As the world crossed the one million confirmed Covid-19 cases mark, with more than half the planet affected by lockdowns, here's a look at the slew of measures taken by the UAE authorities that show the country's preparedness to tackle the deadly virus and its effect on the country's economy.

Be it shutting down schools, colleges, malls, public spaces, building testing labs or pumping in billions of dirhams in the form of economic stimulus packages to support businesses and economy to mitigate the Covid-19 impact, the country has not left a stone unturned to see to the well-being and safety of its residents, citizens and visitors.

The Ministry of Education announced the early start of spring vacation for both public and private schools, colleges and universities, and ordered closure of all educational instiutions from March 8 for four weeks. A sterilisation programme for educational facilities was carried out during the break.

The ministry also announced e-learning initiative that is now being successfully carried out in all schools and colleges.

Stepping up checks at airports and warning against travel abroad, the country announced that passengers would have to undergo tests on arrival and possible quarantine, while Emiratis and residents were urged against leaving the country. Medical teams stationed at the airports conducted tests on passengers, including thermal screening.

Those found with high temperatures and other Covid-19 symptoms underwent a nasal swab test. Passengers were held back until the results are ready. Any travellers who tested positive was taken to a medical facility and monitored.

The UAE tightened its borders and suspended all in-bound and out-bound air travel from March 25. Shopping malls and all other commercial establishments, including fish, meat and vegetable markets were also closed down until further notice, and residents were asked not to step out unless for emergencies. Cinema halls and other entertainment centres across the UAE were also shut down.

A National Sterilisation programme was launched on March 26 to disinfect all public places, government departments and the streets across the country. Authorities urged the public to stay at home over the weekend to allow the programme to take effect.

Prayers at mosques and other places of worship suspended

Prayers at mosques and all other places of worship in the UAE were suspended on March 16 to avoid the spread of the virus.

The UAE launched a drive-through coronavirus testing facility on March 28 as part of its efforts to fight the disease. The facility will provide screenings within five minutes, using state-of-the-art equipment and a medical team.

The UAE built the biggest testing lab outside China to test samples of coronavirus taken from people. The lab is capable of conducting tens of thousands RT-PCR tests per day and is the first in the world of this scale to be operational outside of China.

The Federal Authority for Government Human Resources announced the activation of the 'remote work" system for all federal ministries, authorities, entities and the private sector from March 29. It was also announced that, the total percentage of workers who are required to be present at the workplaces should not exceed 30 per cent of the facility's total number of workers.

Abu Dhabi, on March 16, announced a number of initiatives under Ghadan 21 to support the private sector firms, startups and the residents in view of the crisis. Launched by the Abu Dhabi Executive Council, the 16 initiatives aimed at boosting small and medium enterprises (SMEs) and offer relief for residents.

On March 14, the UAE Central Bank announced that it would be pumping in Dh100 billion as stimulus package to counterbalance the slowdown in the economy set off by the Covid-19. On March 22, the UAE Cabinet approved an additional Dh16 billion economic stimulus package as part of the Federal Government's additional measures to support the national economy, ensure businesses continuity, and mitigate the coronavirus impact.

Governments in Abu Dhabi, Dubai and Sharjah suspended eviction judgments and imprisonment rulings on all rental-related cases. The Sharjah Executive council also approved the release of 100 prisoners and inmates imprisoned for rental-related cases. Other measures include a 50 per cent discount on traffic violations and cancellation of black points committed before March 31, for a period of three months.